For many years, Santa Fe was considered a leader in the nation for innovative housing programs and policies, and the City’s first inclusionary zoning ordinance was adopted in 1997— making it one of the first of its kind in the Mountain West. Dubbed the Housing Opportunity Program (HOP), this policy required developers of for-sale housing to set aside units within subdivisions for lower income families and provided four different methods to satisfy affordability requirements. These approaches ranged from setting aside a small portion of a project for very low-income families to other scenarios where nearly all the units were set aside for moderate-income households. In exchange, developers were given incentives to help offset the cost of creating below-market rate housing, such as increases in the number of units they’re allowed to develop on a given parcel of land (density bonus), as well as permit, impact, and development fee waivers for affordable units. This is an important element of inclusionary program design that we’ll touch on later. But without adequate offsets and incentives, the costs of creating affordable units are passed on to market rate housing within the development, which can raise the cost of market rate housing, or in the worst-case scenario, make projects financially unfeasible. The HOP program was the first of its kind to have a rational nexus based on the market values and the actual impact of that housing development on affordable housing, finding that the more expensive developments were, the more they generated a need for affordable housing to offset its impacts

The HOP program was part of Santa Fe’s strategic response to affordable housing in the early 1990’s that was nationally recognized for both its novel approach and dramatic positive outcomes. The City of Santa Fe was even awarded an Innovations in Government Award from the Harvard Kennedy School of Government for the Affordable Housing Roundtable and its success in spawning new organizations and programs. Imagine, the City of Santa Fe getting an award for innovation! But within this framework, the HOP program is widely considered a broadly successful program producing 100s of units of affordable housing in all areas of the city.

In 2005, during the height of the mid-aughts housing boom, and seeking to build on the success of the HOP program, a new inclusionary housing policy called the Santa Fe HOMES program was adopted. This new iteration of the inclusionary zoning program nearly doubled the proportion of affordable units required in new homeownership developments to 30% for any projects with ten or more units, providing only one method of compliance instead of the four options previously available. It also created for the first time, a requirement that new rental housing development also set aside 15% of new units for low-income families. This replaces the previous approach of the City aggressively recruiting affordable rental developers to build income restricted housing in the City.

It is worth noting that at the time, there was considerable debate even among nonprofit housing advocates about the financial feasibility of such an aggressive 30% requirement and a wholly new rental housing requirement. But all of that would become moot with the economic downturn.

With the housing crash in 2007, housing development ground nearly to a halt and with it, the production of new affordable housing. The following image from a Santa Fe Public Schools presentation shows housing permits issued from 2000-2017 in both the city and county. 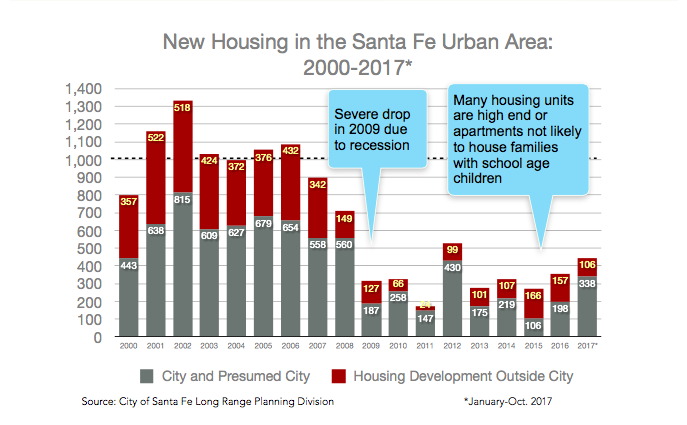 Then, recognizing that not a single unit of rental housing, affordable or market rate, had been created under the new program, the City began exploring ways that they could make the affordability requirements for rental housing less burdensome. This led to a temporary allowance for developers to pay a fee-in-lieu (pay a fee in place of) providing the affordable housing. Because the sunset of the fee-in-lieu provision is so central to the changes being proposed to our inclusionary policy, it’s worth spending a bit of time explaining exactly what this is.

Nearly all inclusionary zoning programs include a fee-in-lieu option. This is typically seen as a legally mandatory aspect of any inclusionary policy that allows a method of alternative compliance for a situation where creating affordable housing on-site presents an “extreme hardship” for the developer. Practically, fee-in-lieu is almost never used, except in situations where the affordability calculation produces a partial affordable housing unit and the fee is used to calculate a contribution instead of building part of a house. Generally, fee-in-lieu is not provided as an option to developers, they have to make a case for this means of alternative compliance, something that nobody has successfully done yet with a homeownership project in Santa Fe. This is worth repeating because the idea developers often pay the fee is a pervasive myth. The reality is that homeownership projects of 10 units or more always have created income and price restricted housing on-site.

So as a way to make affordable rental housing more financially feasible, the City created the fee-in-lieu option by right for rental housing. This rule was created as a temporary fix and the provision sunsets at the end of 2019. All in all, this triage approach has proved successful, with over $700,000 paid in fees that support City housing programs and nearly 2000 units of market rate rental housing either in development or the land use approval process. This was critical because the 10+ year period of no rental housing development, during which we saw significant population growth, has led to a significant deficit of rental housing. In fact, the vacancy rates for rental units are functionally at zero, which has driven a 46% increase in market rate rental rates, just since 2014.

It’s also important to note these fee-in-lieu payments do not just go into the City’s general fund, but to a dedicated Affordable Housing Trust Fund at the City that supports the development of new income restricted affordable housing, as well as new innovative housing programs. One example is the City’s unique rental assistance program. This program helps people facing homeless because of a temporary financial hardship stay in their home, or helps working homeless with a first month’s rent and/or security deposit. This highly effective program’s creation was possible only because of an infusion of new funding into the Trust Fund, which has no recurring source of funding (that’s a whole other blog post…keep an eye out).

There is no doubt that inclusionary policies in Santa Fe have had broad positive impacts in our community. As a City, we are able to help literally hundreds of families a year buy homes, families that would otherwise not be able to purchase a market rate property. But it is also worth dissecting some of the pitfalls and unintended negative outcomes that can be associated with inclusionary policies.

One of the biggest issues housing developers mention is that, to make new development financially feasible while providing a significant portion of housing at or below the actual cost to produce, smaller infill projects have become financially unworkable. This tends to drive new development to the periphery of the city, which has a whole host of other negative unintended consequences like school enrollment pressures, legacy infrastructure burden on our tax base,  stretched public transportation networks, and a lack of basic services and access to jobs in areas where moderately-priced homes are located. 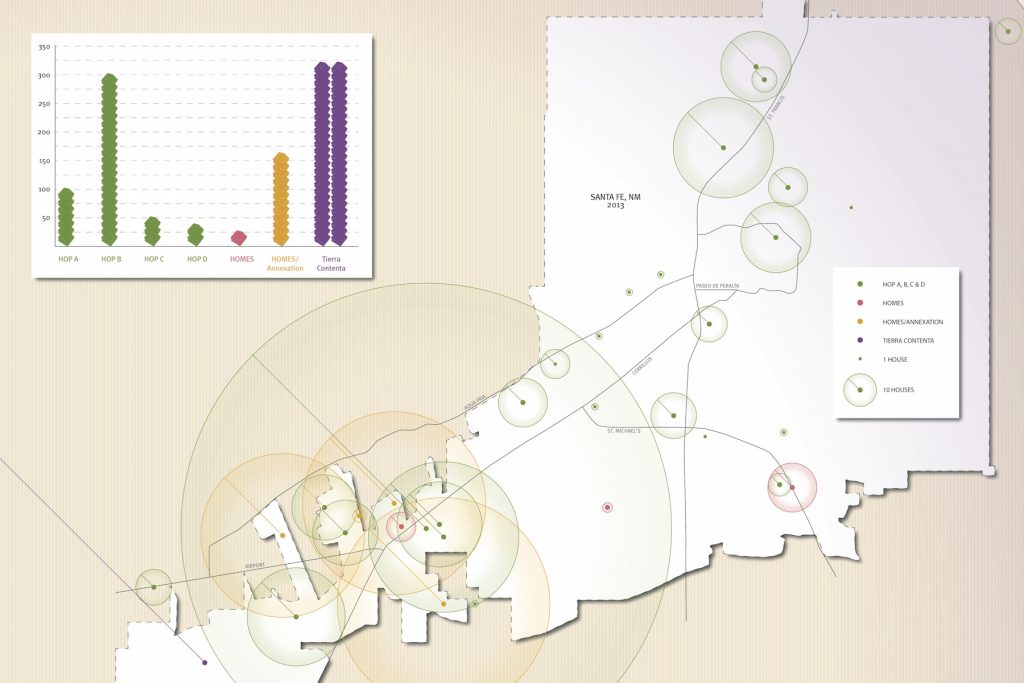 This, along with other “exclusionary housing policies” (that’s also a different blog post) such as historic zoning overlays and very low-density zoning, have led to deep economic, racial, and age segregation in our community. This graphic produced by the City Long Range planning office in 2013 shows this phenomenon clearly.

Another critique of inclusionary housing policies is that, because profit margins in housing development are low and relatively fixed, they place the majority of the burden of affordable housing creation on entry level home buyers and market rate apartment renters. If we stop to think about the things that are most destabilizing our housing market, it’s really the second-home luxury market which really drives housing costs away from local wages. Yet large single luxury home development currently contributes nothing to affordable housing. And in fact, many would argue that we are functionally subsidizing second homeownership by having extremely low property taxes (Santa Fe County has the 30th lowest property tax out of 38 counties in New Mexico) and high sales taxes (GRT).

Lastly, and the one that has the greatest importance in the current conversation about rental inclusionary housing policies, is that too stringent an affordability requirement makes housing development nonviable. As an old boss said during the debate around the HOMES program ordinance, “30% of nothing is nothing.” Often when I explain this to folks in a community that is contemplating an inclusionary requirement, you hear a reflexive response that land developers and homebuilders are getting rich from their work. But in reality, much has changed from the land development economics from before the economic downturn.

It has literally never been more expensive to build housing, and I say this from direct experience. Developers, nonprofit and for-profit alike, face ever-rising land costs, increasingly complex regulatory and infrastructure requirements (new development in Santa Fe must provide all of its public infrastructure like roads, and utility infrastructure), a shortage of skilled trade workers that lingers from the economic downturn, record construction costs being driven by high demand, trade wars, climate driven natural disaster recovery, and historic low unemployment rates. In most cases, homebuilders working at production scale can hope for a 10-12% return for their investment, which is a slim margin when the unforeseen risks in housing development can often have million dollar consequences. Faced with high risks, relatively low rewards, things like costly affordable housing requirements can make developers simply pass on projects, as was the case with rental housing development in the last decade.

So…how will the proposed changes to the inclusionary zoning rules impact these factors?

In our next installment we’ll talk about the specific changes being proposed to our inclusionary housing policy and some other policy goodies that are being addressed with this ordinance update. We’ll also break down how these changes came about and how we think it will impact affordable housing in the community.

(About the author: Daniel Werwath is a nonprofit affordable housing practitioner in Santa Fe working in community planning, policy development, and nonprofit housing development since 2003.)